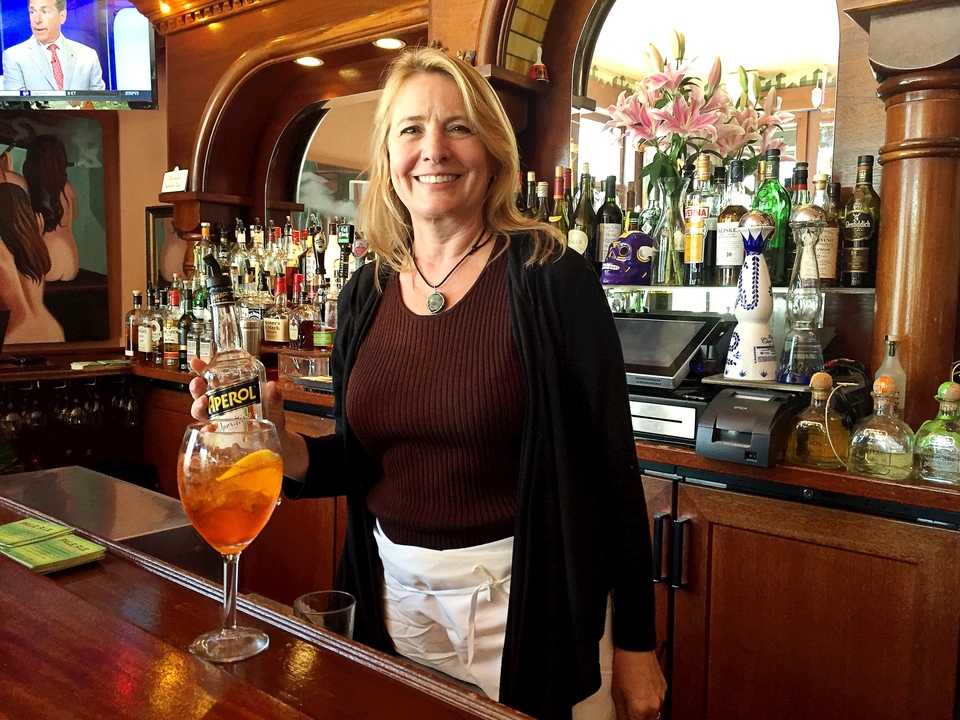 The pandemic presses on as the number of COVID cases and deaths dip and spike. A historical movement calling for racial justice and equity in response to police brutality marches through our streets. An economic recession bears down on our country. We may be fatigued, but we go about our daily lives, working, hoping, and striving for change in all of its necessary forms.

It’s natural for us to rely harder on our communities than usual right now. We’re in a liminal space – a time of transition from one way of life to the next. We need gritty community leaders who know how to keep people together through the ups and downs and who aren’t afraid to spark change.

I find this personality in Barbi Tice, Managing Owner of Bell Tower, a bar and restaurant  in the Polk Gulch neighborhood. Bell Tower reflects the handiwork and philosophy of its owner. It’s a gathering place, it’s a home, and it’s an anomaly amidst the sprawling, somewhat impersonal metropolis of San Francisco.

Barbi describes Bell Tower as the place where neighbors can stop by and ask for a couple of lemons or a cup of cream when they don’t want to go out and buy the whole carton. That kind of intimacy and familiarity almost feels borrowed from another time, when people were more in touch with their neighbors and environments.

The more I speak with Barbi, the more I’m fascinated by the fact that Bell Tower’s clientele reaches the full gamut of city dwellers. People of all genders, sexuality, ethnicity, and socioeconomic class love this bar. It’s home to them: They come to hang with Barbi after they get off their work shift at midnight, they come to cheer on the Minnesota Vikings ( Barbi’s home team), and they come simply to be with each other. Barbi knows how to bring people together.

“I like making people feel good,” she says. “I’m not perfect. But I try my best.”

When I ask about her staff, she says with much love, “The staff is great. I’m only as good as they are. They’ve been doing what it takes – filling in the blanks without question.”

Her love for people isn’t just born from a desire to help; her love translates to actions that uphold and protect people. She’s managed to keep health insurance for her employees during this time and split up the work shifts so everyone has hours.

Bell Tower is currently open for outdoor dining. In addition to standard preventative measures, Barbi takes the temperatures of her staff. She also plans to extend the same procedure to her guests when dine-in seating resumes, as well as requiring basic contact information so that the restaurant can contact trace and decrease the spread of the coronavirus. She describes how there are older customers who come to the restaurant for their one outing of the day. She’s doing all in her power to give them a safe dining experience.

Barbi Tice has a lot of grit. When she and financial partner Lou Vittes were trying to open up Bell Tower in a residential area, she had many obstacles to overcome. At age 28, she poured all of her savings and credit into securing a spot for her business.

There was a church within 500 feet that could’ve said no to a new bar. There were neighbors who didn’t want a bar near them. There were city permits and liquor licenses to attain, each threatening to keep Bell Tower from opening. But Barbi pushed through each obstacle.

The result? A bar that the neighborhood can’t live without.

This grit hasn’t left Barbi over the years since opening. She isn’t boarding up her windows like some other businesses have in response to late night opportunistic looting across the neighborhood. In fact, she and her husband sleep at the restaurant every night to protect it.

And it’s not just about protecting her own livelihood. She’s protecting a vital, safe gathering space for the diverse community that continues to call Bell Tower home.

Barbi doesn’t follow the crowd or believe in a mainstream way of living life. After high school, she went to the University of Minnesota to study chemical engineering. Halfway into her first term at the university, she knew the field wasn’t for her so she quit.

“I thought I would go to college and go farther than that. Get a real job. But I don’t like real jobs,” Barbi jokes. She eventually made her way to San Francisco at 21 years old, taking an office job in finance, crunching numbers. That didn’t suit her either, so she quit and went back to a former gig – serving and bartending. Little did she know how her life would change, when a few years later Lou Vittes, then a long-time customer of hers, wrote his number on a napkin and slid it towards her.

“Want to open a bar with me?” he asked. Barbi said yes.

There’s something commendable about the way Barbi listened to her gut. Even though she didn’t know what it looked like to open a bar, she pursued it anyways because that’s what she wanted to do. She honored her desires and created a neighborhood gathering space that honors others.  I respect people like her. When a leader listens to their intuition and makes decisions based on their passion and concern for others, communities tend to benefit.

However, this doesn’t mean that community leaders sleep like babies at night.

“I feel like I’ve been treading water for the past three months. Am I going out to shore… or am I going out to the abyss?” Barbi asks quietly over the phone. Her question hits me right in the chest.

Who hasn’t wondered this? With the seemingly insurmountable stress weighing down on community leaders, it’s easy for them to wonder at times if they’re really helping or making progress. The fact of the matter is that these leaders have a tremendous impact on their communities, and especially during times of duress.

Recently, Barbi opened her door to find a box sitting along the doorstep: It was a beautiful bouquet of flowers from some of the regulars at Bell Tower. Attached was a note that read: “Thank you for being a light in the neighborhood. We don’t know what we’d do without you.”

To all of the other community leaders across the country right now: We don’t know what we’d do without you either.