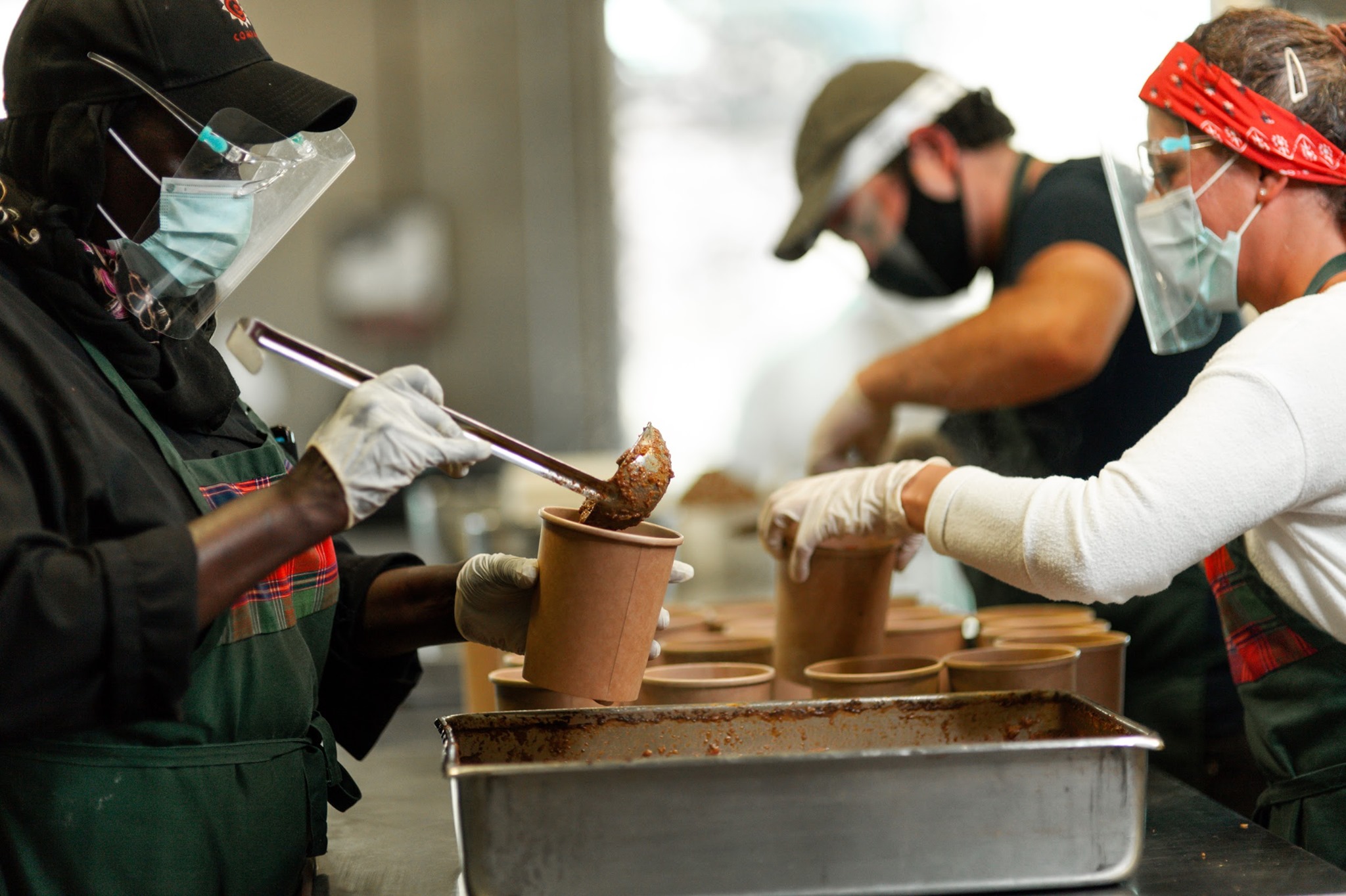 Above: The Komaaj Kitchen staff hard at work

You may know Komaaj for its successful years of juggling pop-up restaurants, Komaaj Catering for large events, and Komaaj Kitchen’s first brick-and-mortar in Berkeley, but many don’t know the depth of its operation.

Whether you’ve seen Komaaj Kitchen’s new relocation to San Francisco’s The Laundry or caught a pop-up in California, New York, DC, or Vancouver, Komaaj has a massive impact.

In reference to the recent brick-and-mortar relocation, Sadr reflects on the journey. “We wanted to do a brick-and-mortar project…fine-dining or casual…” Sadr starts. “We came up with project Komaaj Kitchen…that would collaborate with wineries, coffee companies, and breweries…” That way, the Komaaj brand remains diverse, adaptable, and expansive.

Sadr found a gap in these demographics, realizing, “many locations that do drinks have a small kitchen but don’t do food…” As a result, he saw “a need for such a collaboration.” Coupled with Komaaj’s unparalleled Northern Iranian food, consider San Francisco sold.

Komaaj is an evolving conglomeration of visions, the newest being Komaaj Kitchen at The Laundry. Though Komaaj Kitchen and Komaaj Catering are separate projects, the pandemic’s forced a fusion of sorts.

“We did a pivot by April…” Sadr mentions. Before the pandemic, Komaaj Catering was featured at big parties, corporate events, and festivals, which are now on pause. Instead, the catering kitchen’s delivering food to people’s houses.

“We [started] doing food delivery to houses and individuals…it took less than a month to redesign the website and add ecommerce,” Sadr explains. “Now Komaaj Catering does family meals all over the Bay Area.” Having both Komaaj Catering and Komaaj Kitchen offer delivery proves to be the pandemic loophole for the best Persian food.

Sadr reiterates the continual unfolding, still. “We lost two projects. By now, we were supposed to have three or four locations in the Bay Area…Those two are not gonna come back which is sad because 2020 is supposed to be a year for us to really expand…another challenge is to really save the company…” Sadr suggests that—while hopeful—Komaaj Kitchen has more riding on it than people know.

Komaaj’s innovation mirrors Sadr’s own life path. As a material engineer, Sadr moved to the states to get his master’s in renewable energy. Before starting the program, he worked at a Persian immersion-language school summer camp.

After a cook quit unexpectedly, Sadr stepped in as a temporary replacement. Upon gaining  substantial positive feedback, his life path changed.

“I started reading about the food industry…[it] has a direct impact on sustainable issues. Food businesses, restaurants, chefs are very active on these matters…” Sadr learned. Among his deepened inquiries, he found a lack of Persian food representation.

As an engineer who seeks solutions to problems, Sadr claims, “We wanted to solve the problem…the problem was Persian cuisine…I wanna say that it’s the most under-represented cuisine in the world.”

Growing up in Northern Iran, “we had farms, gardens, spent summer, months after months [there]. When I was older, I traveled extensively…hiking, camping, [it was] always so fascinating to me to learn more,” Sadr continues.

Komaaj itself is a traditional Persian bread or pastry. Sadr thought of his grandma’s komaaj while naming one of their first Facebook pages. After that, Sadr vowed “not to serve any common, popular Persian dishes that you can find in U.S. restaurants.” His menu promises exactly that.

While Sadr mentions that rice, fruits, veggies, herbs, and fish are dominant ingredients in the Komaaj Kitchen, he specifies how Iranian Traditional Medicine (ITM) handles them. “Like yin-yang in China or Ayurvedic cuisine in India, we have the concept of hot and cold ingredients…I’m not talking about the temperature, it’s the property of each ingredient.”

Sadr summarizes that “the whole approach of Persian cuisine is to always balance these two ingredients together. We consider walnut as a hot ingredient and pomegranate molasses as cold…” This Iranian food philosophy makes sense after hearing Sadr discuss signature dishes.

Their most popular, kabob – “[is] not kabob technically. It’s roasted eggplant with our special bieh sauce.” Sadr’s proud to mention that recipe’s been featured in the New York Times, also highlighting his use of walnuts, seeds, varying molasses, tea, and herbs.

Since the pandemic strike, Sadr admits to having difficulty finding the same top-quality ingredients. Still, staff’s working with local farmers and markets to provide the most integrous Northern Iranian food in the area.

The advantage to a Komaaj-kind of operation is that building’s always constant. Sadr’s rebuilding from the whiplash of losing loyal staff, training new staff, starting new projects, and maintaining the highest caliber of Northern Iranian cooking in the Bay Area. Like anyone, he balances the need to “try to understand the risks, prepare for that, and progress as well.”

The good news is, during this time, Sadr’s environmentalism’s ignited ten-fold. Among the endless takeout plastics and wasteful packaging, Sadr questions, “Are we going to ruin the environment because [of] COVID-19?” Now, the Komaaj crew offers compostable packaging despite its costs.

No matter the rigor of this current rollercoaster, the integrity of Komaaj is unmatched.

Sadr’s proudly backed by a diverse team, with folks from Asia, Europe, Iran, and Africa. Working together, Sadr notices people’s deepened relationship with culture. They “get more connected to their roots, their parents’ backgrounds…” he names.

It’s obvious Komaaj fosters transformation to all who come across it. Support Komaaj Kitchen to see how Northern Iranian food’s the kind you didn’t know you needed and can no longer live without.