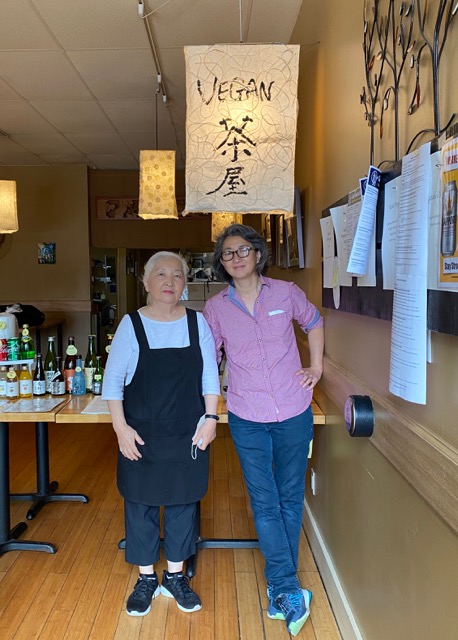 Pictured above: Mie Katsumata (right) and her mother

When I spoke with Mie Katsumata, owner of Cha-Ya San Francisco, I immediately noticed her easy sense of humor and a deep awareness for the importance of unity during a time like this.

Cha-Ya is a vegetarian/vegan Japanese restaurant, whose menu is inspired by “Shojin Ryori”, which is Japanese buddhist cuisine. They serve dishes like vegan uramaki sushi rolls, stuffed eggplant tempura, and traditional udon and noodle soups. What I most enjoyed about speaking with Mie was the way she educated me about Japanese cuisine through stories, history, and personal anecdotes.

She started with the story of Cha-Ya, and how her father, Atsushi Katsumata, a classically trained Japanese chef with a blowfish license, came out of retirement in the 1990s. He opened up Cha-Ya’s first location in Berkley, on bustling Shattuck Avenue, located just down the road from Alice Waters’s famous restaurant, Chez Panisse.

Atsushi decided on vegan cuisine because he figured it would be more fiscally successful and less of a risk. As he looked around at Berkeley and at large, he saw different food movements cropping up: slow food, veganism, and farm-to-table.

Atsushi’s shrewd observations and response to these shifts resulted in local and critical success. In the late 1990s the New York Times did a piece on Cha-Ya, and in 2004 Atsushi opened up a second location in San Francisco. In 2012, after he retired, his daughter Mie took over the Bay Area restaurant.

Mie did a great job of breaking down some of the nuts and bolts of how Cha-Ya derives so much of their cuisine from the most traditional Japanese techniques. At the base of Japanese cooking is a dried stock called “ dashi”, which ranges from shiitake mushrooms, kombu ( giant sea kelp), to bonito flakes and anchovies. What’s fascinating is that Atsushi didn’t have to necessarily “veganize” dishes; so many flavors and derivatives are naturally vegan in themselves.

For example, Cha-Ya uses kombu and shiitake as their stock for many of their dishes. Mie explained to me how these stocks help bring about that highly sought after umami flavor. Additionally, she described how the development and usage of soy sauce and sugar in Japanese cuisine brings multiple dimensions of flavor to their dishes.

“It’s scientifically appealing to the human palate. It’s the blending of salty and sweet, salty and sour, or sweet and spicy,” Mie said in regards to the flavor contrasts in Japanese cooking. She said how their menu isn’t modern and every Japanese person has heard of the dishes they serve because they’re timeless, tried and true meals.

The most modern they’ve been is simply moving along with the times of Japanese food trends. Mie explained how sushi didn’t show up in grocery stores until the early 1980s.

“If you went to a sushi bar in 1975 in Japan, there’d be no California rolls. They didn’t exist back then.”

Mie also described the current state of affairs for Cha-Ya San Francisco: They lost 80% of revenue so far during the shelter in place order, she was able to secure a PPP loan to pay some of her employees, and now she’s looking to adapt to the ever-shifting future of dine-in.

In addition to takeout, Cha-Ya is now offering meal kits to-go for customers, so they can bring home everything they need to make a delicious vegan meal. Mie even made videos of her mother cooking the meals and posted them on Youtube for customers to watch and follow along.

She describes her mindset as one that’s simply trying to manage all of the possibilities, which seem to be changing on a near daily basis. Mie recently learned how San Francisco restaurants are now allowed to open up outdoor seating, but they have to get a non-fee permit first. She wants to be flexible and ready to make adjustments as more changes start to take effect.

When I asked Mie what she’d tell the San Francisco community, her response seemed to perfectly match the friendliness and warmth she’d exuded during our phone chat:

“I would tell people to be kind. Nothing bad came from being kind and doing the right thing to the best of your abilities. That’s been the mantra I’ve been operating on the past few months.”

It’s a great mantra and one that can only help Cha-Ya San Francisco and other local establishments moving forward.