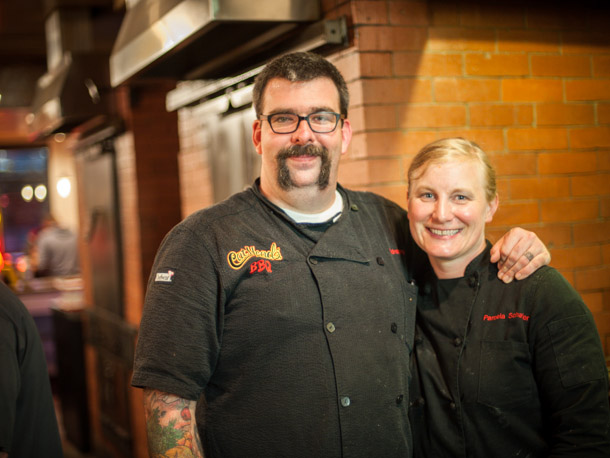 CatHead’s BBQ is owned by Richard Park and Pam Schafer, professionally trained chefs who are partners in business and life. They’re dedicated to serving the neighborhood with the best barbeque dishes, drawing inspiration and flavors from a variety of North American regions. CatHead’s BBQ has been around since 2008, before it had a brick + mortar location and attention from the likes of The Food Network. Right away, I admired how Richard labeled himself and Pam.

“We are what we seem. We’re owner-operators. We don’t ask our employees to do anything we wouldn’t do,” Richard said.

CatHead’s BBQ is more of a casual, to-go restaurant and therefore already have a takeout and delivery setup in place. However, the pandemic has taken away 80% of their business. Their catering services are on hold and the takeout business, which relied heavily on the Financial District lunch hour, has seen a sharp decline.

CatHead’s BBQ was started by Richard and Pam after they graduated from culinary school and moved out to San Francisco. They found that BBQ was a rather underdeveloped cuisine in the SF food scene and decided to fill the void. They share similar roots. Both hailing from rural areas originally, Pam and Richard grew up with comfort food and knew the value of using simple techniques to make flavorful dishes. The two initially started CatHead’s BBQ as just a catering company, but their business grew as they presented dishes at street fairs and did pop-ups around town.

In 2012, their lives turned a corner. They bought out Big Nate’s, a preexisting BBQ spot, finally securing a space to start the restaurant. Richard’s dad, a salesman who helped Pam and Richard formulate a deal to buy Big Nate’s, passed away a week after they opened CatHead’s BBQ. Richard explained that his dad’s passing impacted how he viewed his relationship with Pam.

“I was slow to committing to Pam. I had always figured that nothing lasts forever. After my dad passed, I thought, ‘That’s right. Nothing lasts forever.’” Soon after, Richard and Pam got married. Richard joked how him and Pam were already conditioned to the shelter-in-place order.

“People talk about the divorce rates we’ll be seeing soon. But Pam and I – we own a business together, we work together, we live together. We’re a step ahead.”

I enjoyed Richard’s ease and candor about him and Pam’s personal relationship. Clearly, it’s shaped their own professional journey, and not only that, helped them find success.

Eventually their homemade sauces, famously giant biscuits, and perfected recipes got the attention of The Food Network’s show “Diners, Drive-ins, and Dives”. Pam and Richard were initially skeptical about working with celebrity chef Guy Fieri; they weren’t sure about working with a big personality like his and what he’d be like in real life. They also didn’t want to be portrayed in an inaccurate or skewed way on TV. However, the two ended up enjoying working with Guy and the overall experience.

Richard explained to me how summer is the busiest time of year for them. Winter is usually slow, which forces the owners to save up in order to remain financially solid during that time each year. As summer fast approaches, CatHead’s BBQ has a lot of setbacks to overcome and their savings have taken a hit. In addition to decreased business, they’ve been short staffed since three of their employees quit during the shelter-at-home order.

“It’s just me and a 17-year-old cashier doing the front of house right now. We’ve recently just hired someone, but we lost business because we didn’t have enough people up front.” Richard went on to say how having multiple employees quit during this time baffled his mind. His goal was to stay open and keep people employed.

Right now, he and Pam are grateful to Frontline Foods, a non-profit partnering with celebrity chef José Andrés’ non-profit, World Central Kitchen. Together, these non-profits have raised money and are supporting local restaurants, paying them to prepare meals for delivery to exhausted health care workers in hospitals. Richard said they’ve done six meals already and it’s been helpful to the workers.

When I asked for his parting words, Richard said to me, “We’re still here- still fighting. We’re trying our best to stick around.”

I, for one, sincerely hope they do.