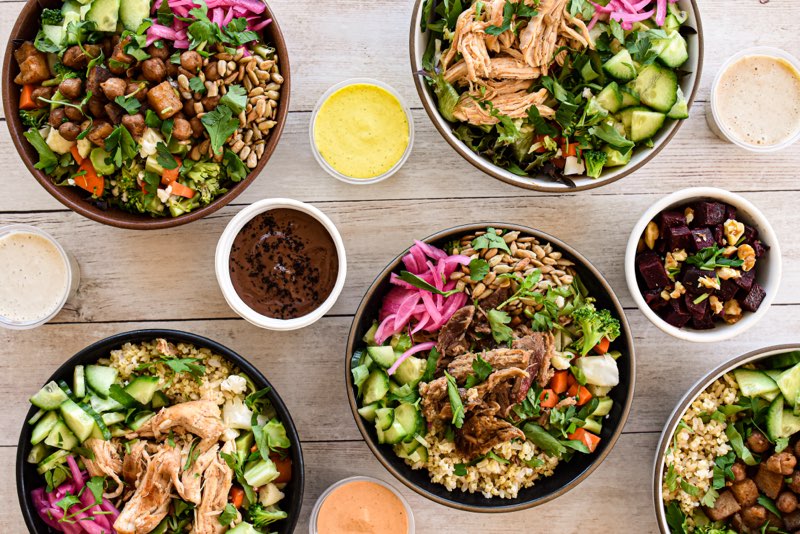 Above: Ben’s Fast Food offers a variety of healthy bowls alongside signature sauces.

It may seem like a pandemic’s no time to start a business, but Ben’s Fast Food couldn’t have come sooner. In a time of heightened health awareness, Ben Rowe’s emphasis on healthy food’s more potent than ever.

It takes no time to see what he means. People aren’t used to food being “healthy, delicious, and affordable,” Ben poses. As core principles for Ben’s Fast Food, he explains that when it comes to health, most people expect to compromise. Until now.

Ben’s roots fuel his entrepreneurial endeavors. “I’m from a place in California that’s responsible for growing a ton of [the state’s] produce and the country’s produce,” he mentions. “The county I’m from has some of the most productive farmlands in America.” Still, throughout school, Ben found himself returning home for the holidays only to lack healthy and affordable food options.

Ben’s background in restaurant consulting had him working with big fast-food chains. As a result, he gained an understanding of fast-casual dining, economics, and a corporate perspective. Fusing healthy food with the fast-food concept “…felt like an idea that I [thought] would be really valuable for the world…” Ben reflects. “I wish I would’ve had [this] back when I was home.”

As all entrepreneurs will recognize, businesses come from one thought. This was that moment for Ben. Three years ago, after his ah-ha moment, he began hosting dinner tastings for his grad school friends. He experimented with different menus, got feedback, and gained confidence in his ability to translate the idea into a business.

Ben shares, “By the end, I fed a couple thousand people or so just through these tastings. I felt really good about the menu, [the] concept…how it’d come together.” Alas! Three years later, Ben’s Fast Food undeniably proves how thoughts create reality.

Beyond having grad school friends as a focus group, Ben’s Californian nativity helps him know the market. He narrates, “Because I’ve been in the Bay for quite some time, I just know firsthand how expensive eating out can be…and rightfully so. Leases are expensive, labor’s really expensive, running a business is really expensive…so it makes sense for the food to be expensive to compensate for the price.”

Ben’s conscious choices keep him from the same battles. He validates, “We can end up being half the price for a comparable dish at most other healthy spots…It comes back to the simplicity…[I] designed everything around delivering really delicious, healthy food at really affordable prices.” If you’re feeling it’s too good to be true, you’ll just have to check out Ben’s to see for yourself.

Ben lends insight into what otherwise makes the concept seem unbelievable. “We run really efficiently labor wise…[the] food we’re using’s in season all year-round, [so we] don’t have to worry about seasonality and flux in prices. The menu’s 100% plant-based except [for] two animal proteins: pork shoulder and chicken. Using more plants is generally cheaper and better for you…” he proclaims.

There’s no lack of diligence, intention, or thought put into this entire operation.

The energy and momentum behind Ben’s Fast Food contrasts that of COVID-19 in the best way. If anything, people are flocking to Ben’s to experience how accessible health is for everyone – perhaps for the first time.

Ben states having “Fast Food” in the name of the restaurant was “very much on purpose.” Upon acknowledging the fast-food stigma that exists in health-conscious communities, Ben’s perspective rests in fast-food being “fun food.” While it’s not always the best choice, it’s often people’s only choice. Now, with Ben’s Fast Food as another option, Ben claims that “It would be a mission accomplished for us if people are like, I want to get fast food…and also think about Ben’s Fast Food.”

He details their clean, preservative and additive-free menu, which was mirrored after In-N-Out’s menu structure. Ben’s Fast Food offers one main bowl with modifications to honor diverse preferences. The bowl-base has mixed grains, greens, and veggies with a slow-roasted protein variant.

When describing the bowl, Ben highlights, “We’re not just salads…We wanted to do something warm, hearty, filling…We have a hearty bowl [for that reason]…give it some healthiness, heartiness, volume, without being a salad.” Ben’s Fast Food proudly offers “nearly 50-100% of the USDA’s recommended [daily] vegetable intake.” That’s music to anyone’s ears – and stomach. The collective thanks you, Ben.

Despite the need for Ben’s Fast Food, COVID-19 wasn’t part of three-years-ago-Ben’s business plan. After choosing not to close on their location in March, Ben and his employee, Isaak, opted for a delivery-only service for now. While a storefront’s ideal, Ben and Isaak are focusing on perfecting the food and creating lasting impressions. Among hand-written thank-you notes and some free pudding cups tossed in for customers, every exchange counts.

Though Ben’s clear about his concept, he continues navigating obstacles involving signage, exposure, and real estate on the business end. “We’ve had to adapt and no one knows what the future’s gonna hold. It’s been a bit of a blessing in disguise because our operations are so simple,” he feels. Ben’s using this time to “nail down operations” in order to scale the business when the world gives the go-ahead.

Until then, boost your mood and your fast-food with Ben’s Fast Food on Morris Street!