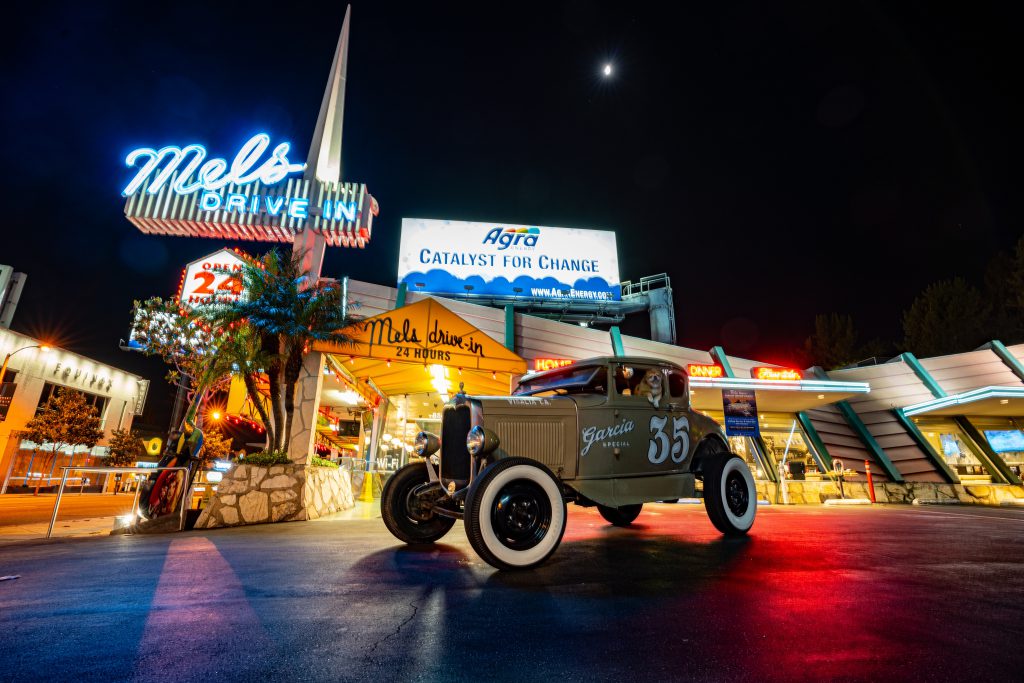 Colton Weiss, co-owner of Mel’s Drive-in, remembers running around under the booths at the diner when he was little. He practically grew up there; and today shares ownership of the diner with his father, Steven, his brother, Chasen, and their partner Gabriel Mendez.

Weiss’ late grandfather Mel Weiss opened the famous diner in San Francisco in 1947. The business has been in their family for 73 years, during which the diner survived bankruptcy, closure, and the end of the carhop.

With much of California on lock down and dine-in food service still suspended, Mel’s is again facing the challenge of keeping customers. The past, present, and future of the diner come into play as Mel’s grandson revisits history in a bid to preserve his family’s legacy.

Mel started the drive-in in the ‘40s as the first carhop restaurant in San Francisco. Customers would park their cars in rows outside the diner while servers brought their orders out to them on trays.

“It was a huge hit,” said Weiss. “A lot of people thought it wouldn’t work out because the weather’s not as good as LA, but it ended up being a huge success.”

The drive-in was booming until the ‘70s, when the advent of fast-food chains like McDonald’s brought the carhop craze to an end. Then, in 1973; Mel’s Drive-in was featured in American Graffiti, the movie that put George Lucas on the map.

“It was the movie right before he made Star Wars and it made a lot of people famous,” said Weiss. “[It] made Harrison Ford, Ron Howard, Richard Dreyfus, all those early actors famous.”

Despite the movie’s success, the carhop had become outdated and business suffered. Mel’s filed for bankruptcy after filming wrapped and closed a few years later. But this wasn’t the end for Mel’s. In 1985, Steven Weiss and Donald Wagstaff opened the Next Generation Mel’s in San Francisco, offering dining services indoors. After its success, several subsequent locations opened up across California. The diner lived on.

Weiss was looking at his grandfather’s old photos with his brother, Chasen, when the idea came to them.

“We were thinking, how can we provide the Mel’s Drive-in experience outside the restaurant?” said Weiss.

The inside of Mel’s is retro, filled with ‘50s and ‘60s decor, brimming with burgers, shakes, and friendly faces. But when the pandemic drove customers out of restaurants in California, Mel’s dine-in services were suddenly obsolete, not unlike the drive-in in the ‘70s.

“So that’s when we decided to bring back carhops,” he said. “So, we’re back to our carhop days, and we’re back to the official Mel’s Drive-in days.”

Mel’s has eight restaurants, with six open today. California customers can now have the full drive-in experience, enjoying Mel’s food from the safety of their cars. Menu highlights include The Famous Melburger, a classic American burger served since 1947, and the Thick Old-Fashioned milkshake in chocolate, strawberry, and vanilla.

The diner gets customers from all walks of life: blue-collar construction workers, professionals, tourists—even celebrities. Harry Styles ordered the chicken tenders and onion rings so many times that Mel’s named the order after him.

“I’ve met so many actors here like Al Pacino, and Jack Nicholson, and all different kinds of musicians. I met Paul McCartney,” Weiss said. “I had Post Malone here; he actually gave our server a $1,000 tip a couple times.”

But Mel’s hasn’t been so lighthearted lately. When mid-March rolled around, the seriousness of the virus set in and Weiss had to close a few of the restaurants. The diner is a such a big part of his family history that its success is imperative.

“It’s been in my family for so long,” said Weiss, who looks like his grandfather. “It’s a legacy that I’ve always felt that’s something I wanted to continue.”

As restrictions lift across the country, the Bay Area will have to wait. Shelter in place orders won’t end in the near future and the coming months are still unclear for the restaurants of San Francisco.

With uncertain times ahead, the diner has returned to its roots. Tourism suffered so much due to the Coronavirus that Mel’s is turning to its locals and regulars to keep the business going, just like in the old days. The diner’s motto: Where the locals meet to eat!

The return of the carhop service will be Mel’s saving grace. People are coming to the drive-in for the nostalgic experience. Some customers are driving up in their 1965 Corvettes and 55 Chevys, the same cars they took to the drive-in back in the day. It’s been such a success that Weiss said they may keep it around beyond the pandemic, and possibly for good.

“It’s making people happy,” he said. “And that’s our main goal every single day at Mel’s.”

Mel’s Drive-in has endured decades of change, but one thing that remains the same is its dedication to spreading happiness. With his son and grandsons at the helm, Mel Weiss’ true legacy is not his diner, but his family.