Delica’s Passion for Authenticity Remains During a Crisis 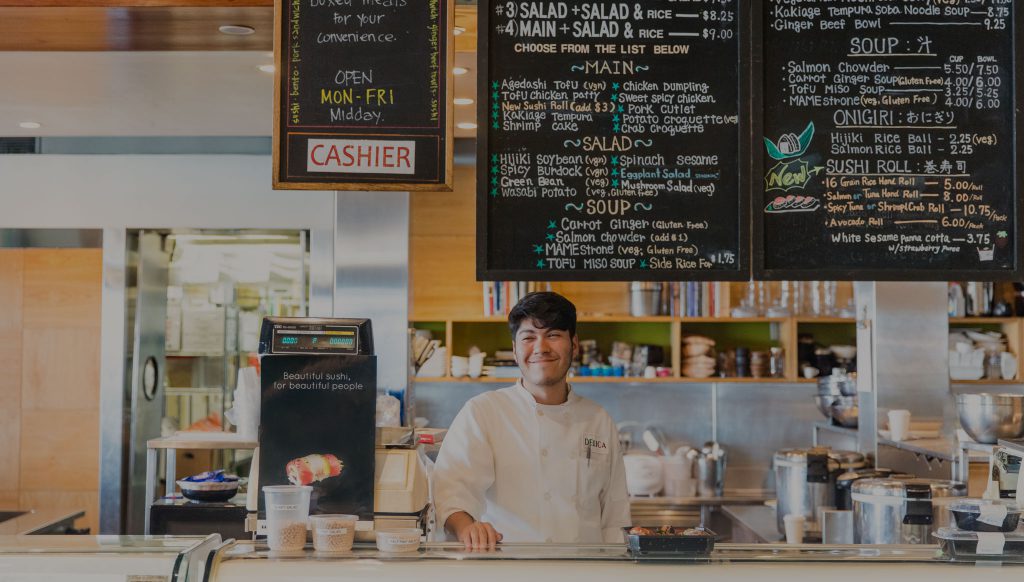 Since the opening of the ferry building in 2004, Delica—a Japanese deli that does takeout—has been a mainstay.

Its approach to Japanese cuisine is a combination of traditional dishes mixed with the fresh, local ingredients of California. Yasuhiro Iwata is the owner of Delica and passionate about the ingredients that he uses in the dishes.

When we spoke on the phone, he emphasized the organic, local produce he uses in his food, and how as a result the menu is mostly seasonal.

I even learned something new about Japanese cuisine as I spoke with Yasuhiro: before this conversation, I didn’t know there was a Japanese style curry (or Japanese curry), however Delica’s Japanese veggie curry is a dish that local customers love and praise for being full of flavor.

Yasuhiro explained that they don’t alter the flavor of the dishes for the American palate. Instead of making their food saltier or sweeter to appease people’s expectations of what they think Japanese cuisine should taste like, Delica serves the real thing.

When people approach Delica and ask for Americanized versions of Japanese dishes, Yasuhiro will explain that they don’t make it that way; it’s one of the many ways Delica focuses on serving a traditional menu versus manipulating classic dishes. They lean into the richness of their local ingredients and the variety of homemade stock
(chicken, kombu, shiitake) which naturally draws out that elusive umami flavor.

Delica used to be own by Rock Field, a Japanese company which owns many restaurants in Japan and America. Rock Field is owned by Yasurhiro’s family, and a few years after they opened Delica up in San Francisco in 2004, Rock Field decided to close it down. It wasn’t performing as well as their other locations and Japanese cuisine simply wasn’t as popular as it is today.

However, Yasuhiro couldn’t bear to see the restaurant close. He saw it as an opportunity to share Japanese cuisine with San Francisco, and there were also many employees’ livelihoods on the line as well. He had 30 employees for five years and he felt it was his duty to find a way to keep Delica open. Thus, he decided to buy Delica from Rock Field, so now it’s independently owned and operated by Yasuhiro.

Since Delica is located in the ferry building, which is known for its organic concept stores and gourmet foods, it’s an expensive locale. That means that rent is very high.

Yasuhiro said that since they’re not near a residential area, it’s harder to get business like others who are closer to neighborhoods. There is a farmer’s market in the ferry building a few times a week which brings in people, but generally it’s been quite slow.

Yasuhiro, his wife, and his two children have been running the restaurant during the pandemic. Recently, he was able to secure a PPP loan and bring back some of his employees, but like everyone else, they’re trying to stay afloat. One way they’re doing this is by using third party apps for takeout to find new customers and take in more business.

At the end of our interview, Yasuhiro said in response to my signing off question ( What’s one thing you’d like to tell the San Francisco community?) that while the pandemic, “ is a hard, unpredictable, uncontrollable situation, we need to support people.”