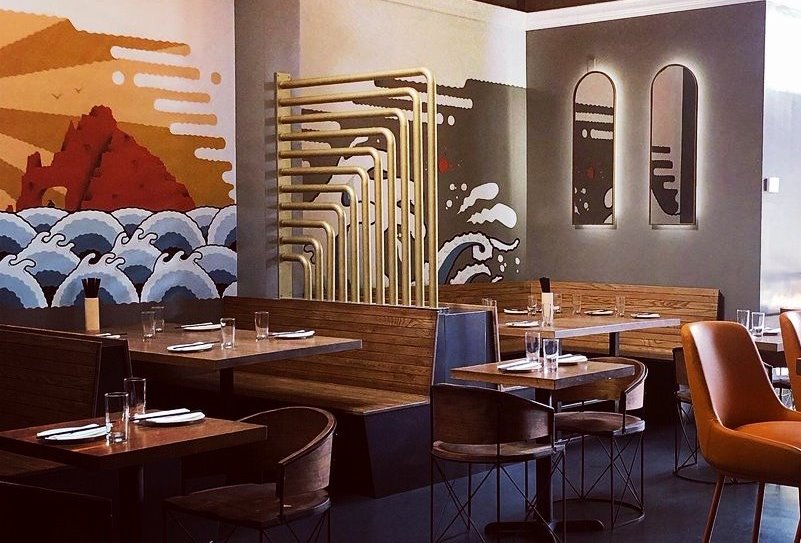 Plates of spicy garlic noodles and salt and pepper shrimp dash out of the kitchen. Hip hop beats through the speakers. A vibrant mural created by San Francisco based artist Jeremy Fish hangs inside the sleek and trendy Asian-fusion restaurant. For $45 within a ninety-minute timeframe, restaurant guests can enjoy bottomless mimosas and an all-you-can-eat buffet at Chubby Noodle in San Francisco’s North Beach neighborhood.

“Chubby Noodle is a fun place. It’s a lively place to hang out with friends but it’s not too stuffy,” said Crizel Fernandez, Director of Operations and who has been with the restaurant since 2018. “The food is crave-able.” Her favorite dishes include spicy garlic noodles and Chubby Fried Chicken.

Weekend brunch is the busiest and most prosperous times for the restaurant, that was until COVID-19 put the global economy at a wrenching standstill. Now the restaurant feels a lot different, meek and empty for brunch-lovers and Chubby Noodle employees alike.

80% of the restaurant’s original 35 person team was laid off, notes Fernandez. 20% of full-time staff have been furloughed but were able to keep their health insurance plans in place—including one month for Fernandez while the restaurant closed for service.

Before shelter-in-place orders became official, news began foreshadowing the impending doom of the hospitality industry. Other restaurants, like those in nearby Chinatown, started seeing fewer customers. The Chubby Noodle leadership did what they could to avert crisis coming their way too. But first—they had to start with ensuring the safety and health of their own employees and diners.

Ultimately, brunch started sounding less noisy. Sales began decreasing by 15%-20%. Then the dreaded time came. Restaurant owner Pete Mrabe had to close Chubby Noodle for a couple of weeks. Mrabe had to use the quiet time to strategize business plans, even as a global health and economic crisis started to confuse the regular expectations and normal routines of people everywhere.

Chubby Noodle staff, like Crizel Fernandez, didn’t want to have to say see-you-later to brunch. She notes, however, that their restaurant must place the safety of employees above restoring profit margins.

More than 5.5 million restaurant and food-service employees lost their jobs as a result of the global pandemic, according to the National Restaurant Association.

Local restaurants like Chubby Noodle are getting through adversarial times not only on a string of luck, but because of their exceptional food and nature of their business. Chinese food “holds well.” Their sister restaurant, Chubby Noodle Chinese Take-Out, has a take-out business model that was “set up properly for the times,” said Fernandez.

Chubby Noodle aims to open two weeks after Mayor London Breed gives the official go-ahead for restaurants to open for full service again. Staff will need to be trained on health and safety mandates and protocols leading up to its re-opening.

In an industry where three decades worth of restaurant jobs have been lost in a span of two months, surviving means hope is still possible.

“We’re hopeful but we’re also being realistic. We know that a lot of people probably won’t feel comfortable at the very beginning to go out and be around a lot of people. It’s been more than two months. People are still shell-shocked.”

Fernandez explains shorter hours while social distancing will be the first test. There will be waves of testing, re-testing and seeing what works best for everyone’s safety.

Chubby Noodle used to offer a casual atmosphere with a “solid service standard”—new plates are given before new entrees and tables are always wiped down. There will now be a new and better standard to accommodate everyone’s well-being.

Many of us will prefer being in a cautious environment rather than popular and crowded one. We don’t ever want to give up gathering, but we want to be more careful in doing so now.

Chubby Noodle, like so many of us, is looking forward to the day when we can enjoy going out to dinner or brunch again. We’ll still care about the same things—good times, good people, good food—but this time we’re going to care about good safety also.