Bean Bag Café: Just Like Home (But with Better Coffee) 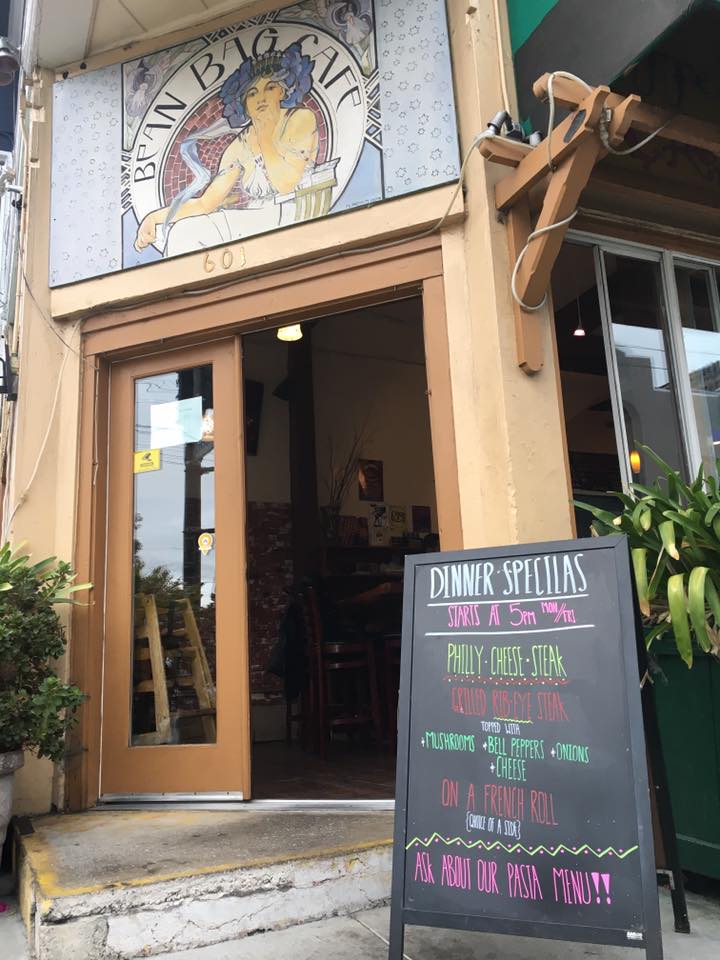 You can make a lot of friends in 30 years – a lot of family, too. That’s how Mike Alzagha sees his staff, his customers, and his community. And, yes; his wife, daughter, and son all help him run Bean Bag Café, a place he hopes feels like “a home away from home,” on the corner of Divisadero and Hayes.

Since 1992, Bean Bag Café has given locals a place to sit down, plug in, kick back, and chat it up – sans the bean bags. Mike takes pride in the all-are-welcome atmosphere his café fosters.

There’s no rushed tone, no frenzied pace. Sip coffee, surf the web; soak in the sunshine and vibrant community. The only expectation is that you thoroughly enjoy yourself; the only command is for the rapt attention of your taste-buds.

Mike tells me that the neighborhood was very different when Bean Bag moved in. But he could feel the potential for growth and longevity from the very start. Thanks to the immense popularity of Kevin Costner’s Field of Dreams, “build it and they will come” was a ubiquitous phrase in the early 90s. Some people, like Mike Alzagha, actually listened.

And like Costner’s character Ray Kinsella, Mike had a vision. Bean Bag would create a welcoming, dynamic environment – the kind that attracts loyal, devoted regulars. It would be a place where you could get a cold brew or a hot one, where you could write or read or savor or salivate. And so it was.

Bean Bag Café has a little bit of everything: locally-roasted McLaughlin Coffee, smoothies, beer, a plethora of pasta, a collection of crepes. And then there’s the eggs – Benedicts, omelets, scrambles, and wraps.

When I ask Mike if he has a go-to comfort food, he’s sure he doesn’t. But he circles back after some careful musing. “Eggs, as you can see on the menu,” and I can hear him smiling. “Probably eggs.”

Stay At (Your Actual) Home

“The café inside and out was a gathering for the community. All that was taken away.”

Unfortunately, people weren’t told to go to their home-away-from-home; they were just told to go home. When the order went into effect, many of the full-time students who make up the Bean Bag staff returned to their home states. It was a bittersweet occasion. Mike lost a lot of family in the process, but it allowed locals to stay on in highly-modified roles.

“A lot of people don’t feel good leaving the house,” Mike says. “Our regulars don’t feel safe going out, handling cash, making that exchange.” While they were already using GrubHub and Postmates, Bean Bag quickly signed on with Caviar, Uber Eats, and DoorDash.

And there were more creative adjustments. Mike and his remaining staff work tirelessly to ensure the best safety and sanitation practices are met. They focus less on coffee and gourmet items that don’t transport well. They embraced the timeless treasure that is the taco.

Mike explains with excitement that Bean Bag has risen to the challenge with foods that travel well and sustain their integrity – items like tacos and other hand-held foods.

But even with creative adaptations, takeout, and reopening; things will be tough. Social distancing doesn’t exactly encourage the kind of revelry and camaraderie most people associate with this semi-sacred space. More than anything else, Mike returns to his concerns for the health and safety of his beloved staff and customers.

There’s a slightly lesser-known quote from Field Of Dreams – one that’s every bit as good. “Go the distance,” says the mysterious voice in the distance. After talking with Mike, I have no doubt that he, and the entire Bean Bag family, will do just that.