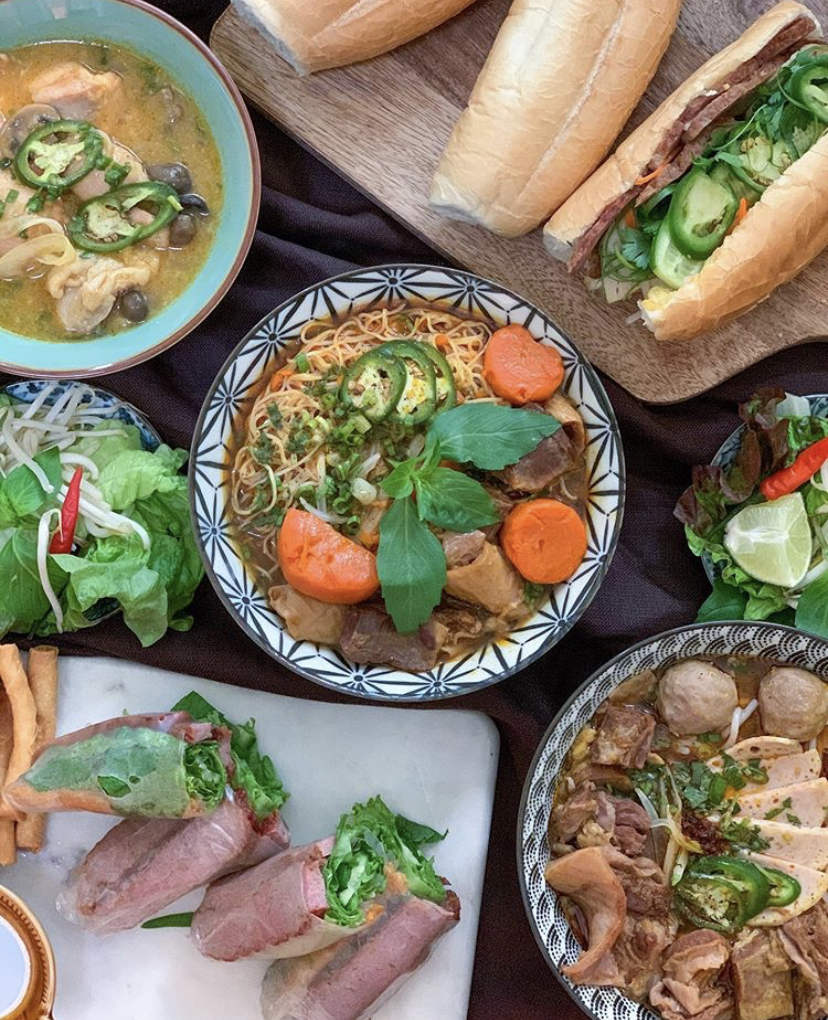 Owners and brothers Eric and Truong birthed Bun Nha Trang just last month. Along this notion of birthing, the sons’ creation came from the one who created them – their mom.

“We didn’t think we’d be in the restaurant business,” Eric starts. “We always had friends over at our house. Mom would always be cooking…everyone’s saying Mom’s food is really, really good…good enough to be in a restaurant.” What began as a natural, humble beginning took flight and landed smoothly at 60 Morris St., all during 2020.

As former residents of Oakland, the sons arrived in San Francisco this year and it’s been a whirlwind ever since. Whereas most people are slowing down, things are revving up for the Bun Nha Trang family with nothing but blessings to count.

While Eric and Truong grew up in Oakland, their parents immigrated to the states after the Vietnam War in the 1970s. The family visited San Francisco often and found a gap in quality Vietnamese food. “We wanted to be the people who brought the authentic tasting dishes [here],” Eric professes.

While summarizing their journey, Eric shares a common motto of his family’s. “Our souls and stomachs were always full even if our pockets were empty,” he states. This humility shines a light on an otherwise dark economy right now. Eric’s transparent about “paving our way as best as we can,” in true Vietnamese fashion. Mid-pandemic, this bootstrapping energy seems aligned with the modest Vietnamese spirit.

Eric reflects on their initial inkling to open. “…During this time, it’s really risky. The economy’s kind of crazy, restaurants aren’t doing too well, [but] we didn’t want to wait any longer.” After asking their mom—who’s represented on Bun Nha Trang’s logo—they took her recipes and ran with them (with her approval, of course).

With Eric managing marketing and Truong in the kitchen, both sons are taking the student role when it comes to Mom’s cooking. When asking her to teach them her recipes, “she felt like a little celebrity,” Eric claims warm-heartedly. Mom still supervises the boys to make sure they’re doing things “the right way—or—her way,” Eric corrects with a smile.

In Vietnamese, Bun means noodles and Nha Trang’s where Mom was born in Vietnam, Eric translates. “For us—and Vietnamese people in general—we love fresh herbs, fresh food.” To ensure the freshest experience, Eric describes their routine. “We wake up—gosh—early. We open at 11 a.m. but we’re in there at 5 or 6 because it takes the stews and broths hours to brew with the bones.” Eric emphasizes that everything’s made fresh every single day, which is evident in their food’s depth of flavor. It’s a true labor of love.

Above all, Eric reverts back to gratitude. “It’s hard but definitely worth it whenever we see the reviews and posts [about the food].” Eric explains his top-selling dishes. He describes their Bun Bo Hue, the dish that most emulates Mom’s hometown. The second most popular’s called Bo Kho, their traditional beef stew.

Already, locals and Vietnamese people are loving their food. Eric credits word of mouth and putting out quality photos on Instagram as their main marketing tactics right now. He’s even initiated a monthly giveaway involving three free meals. Every month, they’ll tag three friends who follow them, put them in a raffle, and reward them for their loyalty. “It’s our little way of giving back,” Eric admits.

When learning that “Vietnamese food is never overly expensive” anyway, it adds deeper meaning to their generosity. Eric continues, “We like doing it because we want to make our food as affordable as we can.” Eric inserts that sometimes they’ll throw in free extra dishes here and there to support the community in return for their support. No doubt reciprocity’s booming at Bun Nha Trang.

New Kids on the Block

Eric’s upfront about knowing they are, indeed, “new kids on the block.” Despite initial fears, they’re building a loyal following. Amidst the freshest made-to-order food, Eric knows once they get people in the door, they gain regulars.

Food reviews and feedback have been spot on thus far. People will say, “This brings us back to our homeland,” or, “It tastes like Mom’s cooking,” to which Eric validates, “…because it is.”

While Eric acknowledges the overuse of the word “authentic,” he reiterates that “This is really authentic Vietnamese food. The flavors are pretty much unchanged…it’s what you’d find in Vietnam…in a Vietnamese household.”

When asked how Eric wants people to experience their food, he answers, “[With] love and warmth to be honest because Mom…that’s just her…she’s always a joy to have in the kitchen.”

It’s only kindness at Bun Nha Trang as everyone continues treading lightly during these times. Eric expresses awe when looking back on this year. “It’s been crazy how in such a short time, we’ve been pretty successful. We’re very blessed…for all the support we’ve been given so far.”

Just one month in and the Bun Nha Trang team’s already got their sights set on a bigger location. “No one knew about us before last month which is insane to us,” Eric highlights. The demand’s proven that Bun Nha Trang may be bigger than even they imagined. After this one, Eric suggests another restaurant may be in their future.

If there’s one thing to know about Bun Nha Trang, it’s that not even a pandemic can squash ambition. So long as you stick near Mom’s cooking, you can’t go wrong. Come support Bun Nha Trang to experience the soul-filling home-cooking you never knew you needed.