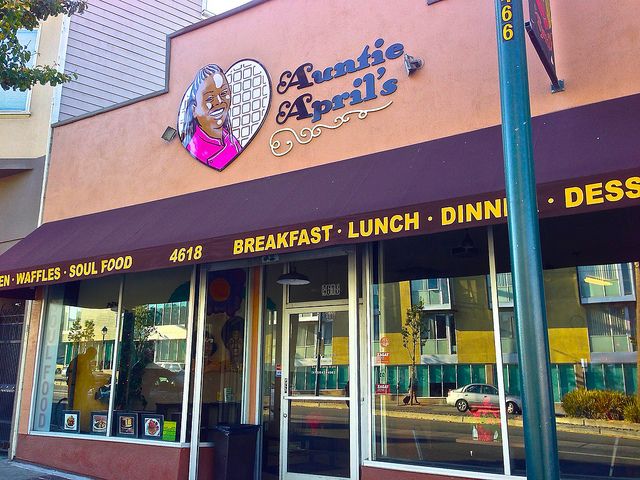 A Welcome Sign: Auntie April’s storefront in Bayview displays the one and only April Spears.

April Spears learned to ride her bike on 3rd Street in the Bayview neighborhood of San Francisco. Now, she owns two restaurants on the 3rd Street Corridor. Being successful in her home neighborhood was an important goal for Spears. “I always wanted to open a business in my community to have more positive role models for the youth,” Spears said.

Spears was raised in Bayview by her grandparents, who hail from Texas and Louisiana. “Both [of my grandparents] were great chefs at home. I learned all my skills in the kitchen from them,” Spears said.

Not only did she learn her culinary expertise from her grandparents, but they taught her how to run a business.

“My grandmother had an ice cream shop, my grandfather had a diner and a gas station,” Spears remembered. Combined with Spears’ love for cooking, it was a no-brainer that she’d open a restaurant. She wanted to share her grandparents’ Southern recipes with her community in Bayview.

Spears has been in business for thirteen years. She opened her premier restaurant, Auntie April’s Chicken-n-Waffles, in 2008. She opened during the height of the recession, so working through tough times is not new to Spears. Auntie April’s is a Soul Food joint; crowd favorites include shrimp and grits, oxtails, and of course – chicken and waffles.

Not only is Spears a staple in Bayview’s restaurant community, she touches almost every aspect of the community through non-profit leadership. She is co-chair of the African American Arts and Culture District, co-chair of the Merchants of Butchertown, and a member of the board of Economic Development on Third Street.

“In Bayview, 98% of the people who have a business on the corridor, live in Bayview,” Spears mentioned. She is passionate about supporting the local community, economy, and people’s appetite for Soul Food. For Spears, Bayview is home and her restaurant staff is her family.

Spears’ passion for her community is reciprocated with their love and support for her restaurants. Although the past few months have been difficult for Spears, she remains hopeful and above all, grateful for her customers. “Since reopening, I have mainly seen regulars return – the people from my community that have been supporting me all along,” Spears said.

One of the most difficult parts of the COVID-19 pandemic for Spears is that Auntie April’s dining environment is hard to encapsulate with takeout. “You felt like you were in your grandmother’s kitchen,” Spears explained of the Auntie April’s space.

She never put TVs inside of the restaurant because she wanted it to be a place to talk to family or friends without distraction. Spears lamented the fact that there is not enough space at that location for curbside dining, but they have been offering takeout since early August.

Luckily, Cafe Envy has space for curbside dining – and one of the few new liquor licenses issued by the city of San Francisco. “We’re here and can use all the support you have to give,” Spears said. She emphasized that, “Restaurants are the heart and soul of our city. They are a big part of the tourism and people’s livelihoods.”

Spears runs two restaurants, is involved in the nonprofit world, and is a new mother—appropriately, her daughter was born in April—all in the name of good eating and Bayview’s success. Her tenacity is as apparent as her chicken-n-waffles are tasty. Come support Auntie April’s to see for yourself how good community building can taste. 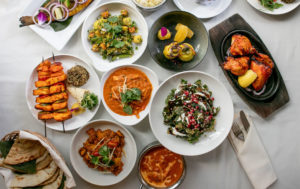 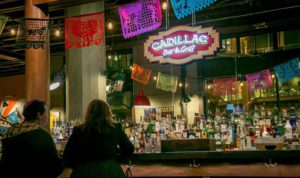 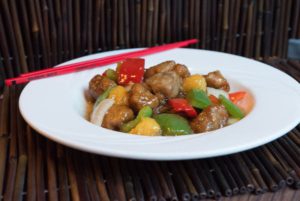